Every spring those perky orange buoys bloom on Golden Lake, marking the shoals that lurk just under the surface, and every fall they mysteriously disappear. To find out how this happens, I asked Jay Foran if I could join him on a recent buoy planting expedition.

Jay lives on McMillan Road and handles the placement of nine buoys as part of the waterway marker program set up by the Golden Lake Property Owners Association (GLPOA) a few years ago. 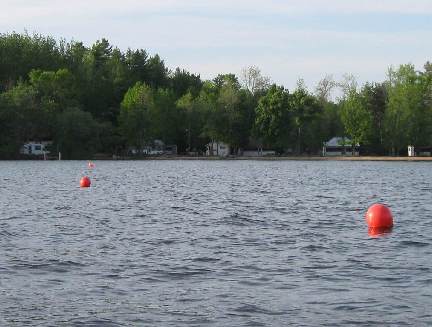 Jay, his son Dylan who drove the boat, and I set out to place some buoys around a rock outcropping in the middle of the lake. You could say we were three boys out to place three buoys, if you didn’t mind the groans from your listener.

There is a lot more to managing the placement in spring and removal in fall than meets the eye, as quickly becomes apparent when Jay starts talking about the job. Although he has a great sense of humour and is usually quick with a wisecrack, Jay is all business when it comes to marker buoys. 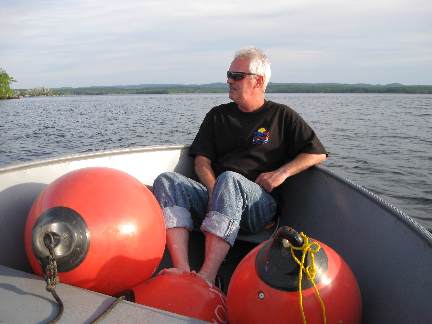 The buoys are a lot bigger up close than they appear in the water. Jay and Dylan would normally be wearing their life jackets, but the weather had been so hot that the water was warm enough for swimming.

The markers are rigged in a very specific way to prevent the rope from wearing out and letting the buoys float away. We start by connecting about four feet of chain to a large concrete block, Jay says.

Then we attach about three feet of rope between the chain and the buoy. The slack part of the heavy chain rests on the bottom and always tugs the buoy towards the concrete block. As the marker bobs up and down with the waves and gets blown around by the wind, the chain acts as a shock absorber so the rope is not constantly being jerked tight by the wave action.

It is a clever system that evolved through trial and error. 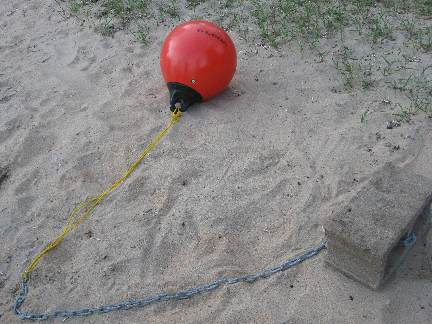 You need to pick a calm day to place buoys so that the boat is fairly stable and so you can see into the water for accurate location of the shoals. Jay says the markers should be placed in about five feet of water, based on the idea that the water level will drop about a foot as the summer progresses and the buoys should be in at least four feet of water.

The markers are placed on or before the May 24 long weekend and are removed just after Labour day. While the spring placement of the markers calls for knowledge and care, the job of removing them calls for rough clothes and work gloves. After a summer in the water, the markers and their chains, ropes and weights are coated with slime that makes them both slippery and filthy to handle. Each year the markers get a good scrubbing with cleanser and elbow grease, which is a job that neither Jay or Dylan enjoy very much. 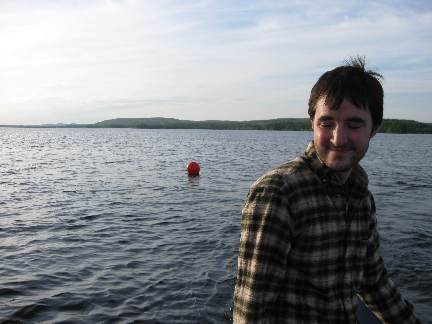 Dylan managed some complicated moves responding to requests for position from his father and he did it calmly and without a single misstep.

Some of the GLPOA marker volunteers leave the concrete blocks in place and tie a plastic bottle to the rope to mark the spot. But the moving winter ice is pretty hard on these temporary buoys, and some of them are torn loose and the rigging is lost.

The GLPOA has created a complete network of waterway markers, made up of around 35 orange shoal markers and four pairs of red and green channel markers. The network of markers and volunteer workers extends from the bridge at Tramore to the bridge at Golden Lake Village. The marker program is paid for by local businesses and the townships that advertise on the four boat launch site billboards at Tramore, Deacon, Island View Drive and Bonnechere Lodge. The billboards include a large map of the lake with shoal locations marked. The Tramore billboard has maps of both the Bonnchere River and Golden Lake. 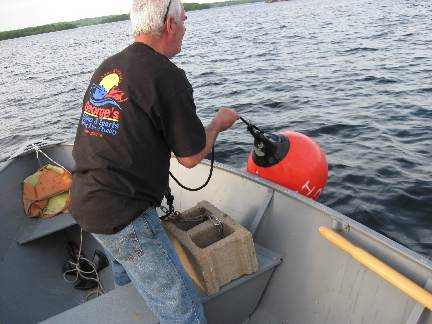 Jay is looking out to one of the other buoys marking the shoal to make sure he places this one in the right relationship to it. This is a job that calls for rough clothes and a boat that can take some rough use.

The residents, cottagers and visitors cruising on Golden Lake and the Bonnechere River depend on the waterway marker system to keep them safe and prevent costly damage to their boats and motors. And now appearance of those markers in spring and their disappearance in the fall is no longer a mystery.