The information below has been provided by the Honourable Greg Rickford, Minister of Northern Development, Mines, Natural Resources and Forestry (MNDMNRF)

Ontario is currently experiencing an outbreak of LDD moth (previously referred to as gypsy moth), particularly in southern Ontario and some areas of the northeast region of the province. Severe LDD moth infestations are cyclical, occurring every seven to 10 years, and usually last three to five years.

In the spring and early summer, LDD moth larvae consume leaves, defoliating trees and leaving them looking nearly dead. LDD prefers oak trees, but during severe outbreaks other hardwoods and, in some cases, conifer will be defoliated. Hardwood trees can produce a second crop of leaves during the growing season allowing them to continue growing and storing nutrients into the fall and winter months. Since conifers can’t produce a second crop of foliage, they may be impacted by severe defoliation. Healthy growing trees can withstand a few seasons of severe defoliation before branch and twig dieback start to occur.

In 2021, the Ministry of Northern Development, Mines, Natural Resources and Forestry (NDMNRF) conducted aerial and ground surveys to map damaged areas and forecast defoliation for 2022. The results suggest 2022 will be another year with high populations of LDD moth causing moderate to severe defoliation in some areas. Lighter defoliation is forecasted in some areas that have been impacted in previous years. NDMNRF will continue to monitor LDD moth throughout the current outbreak cycle.

Although the ministry conducts pest management programs on Crown land to protect foliage of high-value stands (e.g., jack pine and spruce budworm programs), management of LDD moth on private land is the responsibility of the landowner or municipality. The ministry supports these efforts by providing information on forest pests and options for reducing defoliation by LDD moth. Ontario’s Invasive Species Centre also offers resources and information to help people prevent LDD moth from damaging their trees.

In the spring, landowners can put bands of burlap around their trees. This gives the larvae a place to congregate during warm days and they can be physically removed and killed. In the fall, landowners can remove and destroy egg masses.

Landowners wishing to reduce impacts on their property can also have trees sprayed with Btk (Bacillus thuringiensis kurstaki) in the spring by a licensed insecticide application company. This is best carried out by coordinating efforts with other local landowners. Landowners can check their local listings for a reputable insect control provider in their area.

In the past, demand for aerial spraying of LDD has exceeded industry capacity. If landowners are considering having their property sprayed, it is best to engage a licensed insecticide application company as early as possible.

There are also natural controls on LDD moth populations in Ontario:

Below are links to a fact sheet and a roles and responsibilities document to help anyone who may have questions about managing LDD moths during the outbreak period.

Inspect your boat, trailer, boating equipment, fishing tackle and nets and remove any visible plants or animals before leaving any lake or river.

Drain water from motor, live well, bilge and transom wells while on land before leaving the boat launch area.

Empty your bait bucket on land before leaving the water body. Never release live bait into a water body, or release animals from one water body into another.

Wash/Dry your fishing tackle, nets, boat and equipment to kill harmful species that were not seen at the boat launch. Some species can survive for several days out of water, so it is important to: 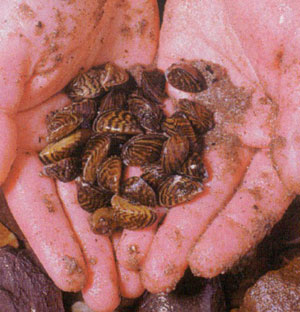 Firewood often contains insects and plant diseases. Cottagers or other visitors who bring firewood from home may accidentally spread those diseases that threaten the health of our forests. The Asian Longhorned Beetle and emerald ash borer are of particular concern. They are both recent arrivals to Canada and without natural controls here.

The emerald ash borer was thought to be confined to southwestern Ontario and southeast Michigan, where it has killed millions of ash trees. But more recently it has been seen in Ottawa, which demonstrates the importance of controlling its spread. The movement of firewood has been the main culprit in its rapid spread in both the U.S. and Canada over the past year. As a result, a quarantine has been imposed which prohibits the movement of firewood in several parts of Ontario. Here in Eastern Ontario we should be taking this risk seriously.

The Asian Longhorned Beetle has been found attacking hardwood trees between Vaughan and Toronto. Both insects can be easily spread in firewood, which may look normal, but still be infested with the insects. 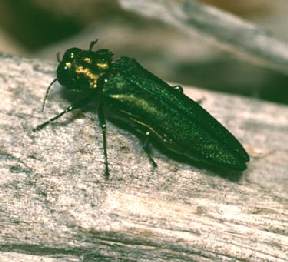 How you can help: 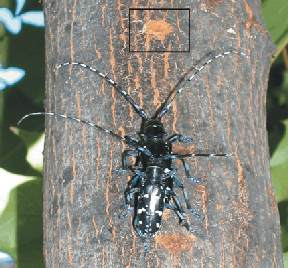 An aquatic invader is camping out on the banks of the Trent-Severn Waterway, and from the sounds of it, is getting very comfortable.

“We have been doing surveillance of this plant; it is the first known sighting in Canada,” said Francine MacDonald, an aquatics biologist at the Ontario Federation of Anglers and Hunters who is an expert in invasive species.

The new undesirable in her sights is called the water soldier, Stratiotes aloides.

It resembles an aloe vera or spider plant, but with one significant difference: “It is very sharp – just to pull it out of the water you have to put gloves on,” said MacDonald.

The Trent-Severn batch was reported by a Hastings area resident last fall. He spotted a handful of the plants in 2007 and tried to weed them out. But the water soldier sprung back. Its ranks have swelled to the hundreds and there is a satellite group of similar size about two kilometers downriver.

Last week, a team went to the site to observe and count the plants.

“From what we have seen, it has become an impediment to boaters,”

MacDonald said. “It could be a huge problem for swimmers.”

Like spider plants, water soldiers have offsets, little plants that detach and take root at new locations, so moving water offers the perfect method for them to spread.

Unfortunately, so are careless gardeners. Water soldiers and many other invasive species can be purchased at Ontario nurseries.

“If you are going to use exotic plants, keep them contained, don’t enable them to escape” by planting them in flood plains or near waterways, said MacDonald.

The biologist said for safety reasons, chemical solutions to repel the invaders are limited. “A lot of times it is very difficult to control aquatic plants … we hope we have found this one early enough.” 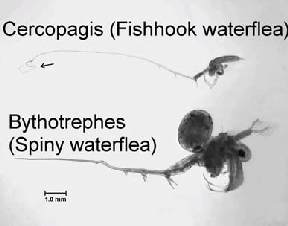 Spiny water fleas can become entangled in fishing lines and down rigger cables. When the cable is pulled from the water, the spiny water fleas attached to the cable look like straight pins. You may see them raise and lower their tails as they cling to the line.

The best defense against the spiny water flea is to prevent its transfer to new lakes or rivers. Spiny water flea eggs and adults can get into bilge water, bait buckets, live wells and coat fishing lines when boating or fishing in infested waters. Please take the following precautions to prevent the spread of spiny water flea and other invading species to different rivers and lakes:

Inspect your boat, trailer, boating equipment, fishing tackle and nets and remove any visible plants or animals before leaving any river or lake.

Drain water from motor, live well, bilge and transom wells while on land before leaving the waterbody.

Empty your bait bucket on land before leaving the water body. Never release live bait into a waterbody, or release animals from one water body into another.

Wash/Dry your fishing tackle, nets, boat and equipment to kill harmful species that were not seen at the boat launch. Some species can survive for several days out of water, so it is important to: