Fishing on Golden Lake and the Bonnechere River

The Fish Committee is also looking into the viability of the walleye population in the lake. Click here for more information. 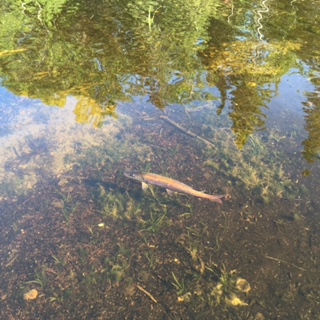 Brian Yourth released this fish, to make its way back into the lake.

Fishing is one of the main recreational activities on Golden Lake. In the 1960s and 1970s the lake was famous for walleye, attracting sport fishers from all over North America.  The walleye began to decline in numbers during the 1980s. 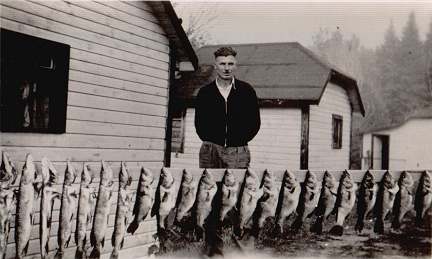 A huge catch out of Golden Lake during the 1930s. The photo was taken at Eady’s Cabins in Deacon.

Kelly Summers while fishing with his Father one evening on Golden Lake was lucky enough to hook onto this  9 1/2 lb. pickerel using a Ratelle lure.  He and his Dad, Jerry were all smiles when they arrived on the dock. Kelly is not only an ardent fisherman, but quite a hockey player.  He has been playing defense for the Valley Titans and was recently picked by the Oshawa Generals in the OHA Junior Draft.  Kelly and his family, Cathy and Jerry live on McMillan Rd. on Golden Lake.

Some Rules for Fishing

“Fishing is an activity that knows no bounds it can be enjoyed regardless of age, race or ethnic background.” Fishing Ontario 2008-2009

Years ago, my husband’s good friend Gus explained to me why it is not only illegal to fish bass before the fourth Saturday in June, it is also just plain wrong. During spawning season, the male bass will strike at anything. After the female lays her eggs, she leaves and the daddy bass stands guard over the eggs, protecting them from predators, attacking anything that comes near, while he fans his tail over the nest to keep the water temperature constant. Knowing that, how can anybody fish bass out of season?

Bass season, for both smallmouth and largemouth, closes November 30 in our area. The limit is two fish if you hold a Conservation license and six if you have a Sport Fishing license.

You can fish for northern pike anytime except between March 31 and the third Saturday in May. The limit is the same as it is for Bass. Muskie season is from the first Saturday in June until Dec. 15, and you can keep one if it is over three feet long.

Perch, sunfish, rainbow trout, whitefish, catfish and splake are fair game all year round. You can keep up to 50 of the perch and sunfish, and some people think they’re the tastiest of the lot.

Fishing for walleye or pickerel as we call it here is different in Golden Lake and Lake Dore, than it is in other lakes in our area, Zone 15. They must be longer than 19.7 inches to be keepers in Golden Lake and Lake Dore and you can only keep two with a Sports Fishing license and one with a Conservation license. In other Zone 15 lakes you can keep four or two fish, depending on your license, and they are keepers if they’re 18.1 inches long.

Round Lake has some special regulations around lake trout. You can keep nothing between 15.7 and 21.7 inches long.

It’s illegal to abandon fish or allow the flesh to spoil. If you catch it, eat it or throw it back. You can’t move a fish from one lake to another, if for some reason you thought that was a good idea.

And there are of course the invasive species. These include round goby, bighead carp, and any species of snakehead what ever they are. Those you’re supposed to kill, and it is illegal to have them live in your possession.

If you need to know more and you do, if you fish – a copy of the recreational fishing regulations summary can be found at the Killaloe Hardware Store when you buy your license.

Extracted from the Eganville Leader, December 20, 2006:

The walleye fishery in Golden Lake will re-open January 1 after a five-year moratorium.  The fishery will re-open with the following special regulations:

For anglers with an Ontario sport fishing license:

For anglers with a valid Ontario conservation license:

The Golden lake Walleye Committee, including representatives from the Algonquins of Pikwakanagan, tourist operators and local anglers, supported the moratorium.

Golden lake supported a healthy walleye fishery during the 1970s, but due in part to over-fishing and water quality changes, the fishery collapsed in the late 1980s.

MNR conducted a Near Shore Community Index Netting survey in the summer of 2006, assessing the state of the overall fish community.  The results of this study, although inconclusive, indicate that the walleye population has grown and can support a limited fishery with special size and catch limit regulations in place.  Future surveys focusing specifically on walleye will provide a more comprehensive assessment of the current state of the walleye